Paid annual memberships, entitling free admission to exhibitions and other events, can be traced to the earliest years of the institution, when the purchase of stock in the Academy carried this perquisite. As early as the 1830s, exhibition catalogues informed the public that a share of stock purchased for thirty dollars allowed visitation of “the Academy during all public exhibitions, and … tickets of admission thereto for … immediate family, or in lieu thereof, tickets of admission for two ladies whom they may designate.” In 1847 an alternative to the concept of stockholder-member was introduced with an annual ticket for two dollars, or a life ticket “for a Gentleman and one Lady” at ten dollars.

By the 1880s, the Academy actively promoted annual memberships at a cost of ten dollars. The price of a basic membership stayed at this level through the 1950s. After that date prices began to rise, and graduated levels of membership contribution and privileges were introduced. Shares of stock were sold until about the late 1960s. Throughout the second half of the twentieth century the concept of membership replaced that of stockholder as a designation of support. Shares of stock never represented any ownership in the assets of the Academy, and stock ownership gradually came to be seen as an antiquated concept for a non-profit institution.

At a special meeting of the stockholders, held September 10, 1974, all outstanding shares of stock were cancelled. At that meeting, the Academy charter was amended, re-organizing the institution as a non-stock, non-member corporation. The process through which this reorganization occurred can be followed in the board minutes of the Academy for 1974, including the minutes of the special stockholders meeting on Sept. 10, 1974.

Historically, the 71 men who signed the original Academy charter in 1805 have been referred to as the “founders” of the Pennsylvania Academy. This designation is not related to the designation of “Founding Member” given to those stockholders who relinquished their shares of stock when the Academy was reorganized in 1974.

The Membership Dept. report for the board meeting of Feb. 19, 1975 notes: “Of the 179 former stockholders taking advantage of Founding Membership, 32 were currently members of the Academy, dropping the old category in favor of the new…” The report also contains a list of over 170 names designated simply as “new members,” probably representing the names of those who turned in stock in exchange for “Founding” membership status.

The Academy was founded in 1805. It was chartered by an act of the Pennsylvania legislature in 1806. It was from the outset a non-profit institution, no part of the assets of which would inure to the benefit of any private individuals. At some point in the 19th century, following a then common practice which is now obsolete or nearly so, the Academy was organized as a non-profit corporation, but one with stock, which was issued to members of the public. Stockholding originally gave the stockholders the right to elect the leadership at an annual meeting, but it did not give the stockholders any proprietary rights to the assets of the corporation, because it was a non-profit corporation.

By the middle of the 20th century, the stock of the Academy had become an anachronistic feature, and the practice of conducting an annual meeting of stockholders had been abandoned. The Academy itself did not issue any new stock. However, people continued on occasion to buy and sell existing outstanding shares. It may have been considered socially fashionable to join the list of many prominent Philadelphians who had owned stock in the Academy, which was (and still is) this nation's first continually operating museum and school of fine arts. In many cases, members of families with long ties to the Academy would acquire shares to give to their descendants. Some brokerage companies made a market in shares. However, it was clear that ownership of stock did not confer any financial rights to the corporation's assets, because it was a non-profit corporation.

The records of the Academy, including the stock book, do not record the price paid for any particular share, but only the fact of the transfer of the share. In the late 1960's and early 1970's, in ascertaining the "value" of shares for estate or tax purposes, such value was placed in the neighborhood of $12 to $16 per share. 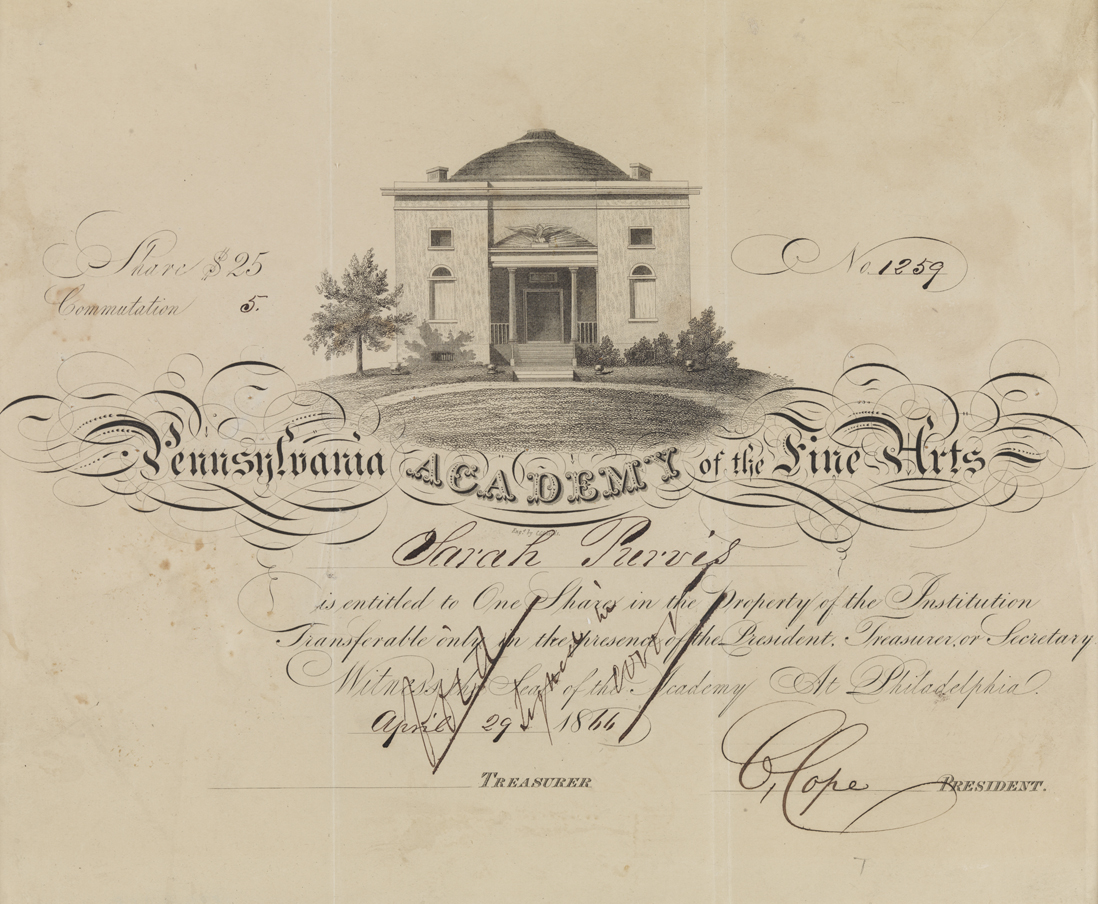 In the mid-20th century, the Board of the Academy from time to time would consider doing away with the stock as an anachronistic nuisance, but no one was quite sure how best to do it, and because it was deemed to have little practical effect and would involve some expense, nothing was done. However, in connection with the forthcoming Bicentennial celebration, in 1974 the Board embarked on a major restoration of the Academy's historic building at Broad and Cherry Streets, and in that connection pursued a major capital fundraising campaign. Significant asks were made to the federal, state and local governments, who wanted reassurance that no part of their contributions would ever inure to the benefit of private individuals. Although they accepted the fact that the Academy was a non-profit corporation, they nevertheless required the Academy to amend its structure to eliminate the outstanding stock, and come into accord with modern non-profit corporation practice.

Accordingly, after due notice to the stockholders given pursuant to the Pennsylvania Corporations Code, a meeting of stockholders was held first on July 10, 1974, then reconvened on September 10, 1974. At that meeting 1,254 shares were represented in person or by proxy (being more than two-thirds of the issued and outstanding shares). A resolution was passed, 1,253 to 1, to provide that the Academy would thereafter be a non-stock non-profit corporation, with the result that the stock would be null and void. Appropriate documents were thereafter filed with the Pennsylvania Department of State to reflect those changes. 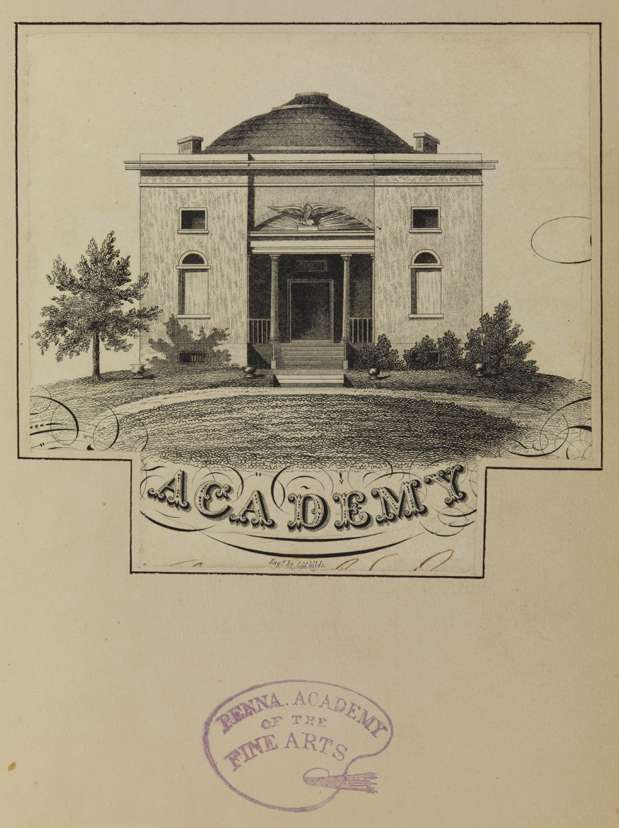 During the discussion at the stockholders' meetings of July and September, 1974, some shareholders had expressed their support for the resolution if some special category of membership for them might be offered. In an effort to retain the good will and support of former stockholders, the Board of the Academy, on September 18, 1974, adopted a resolution which provided that each person who had been registered as a stockholder as of September 10, 1974, would be entitled to become a “Founding Member” or, to use the final terminology, a "Special Life Member" (or to designate an immediate family member in his/her place) provided that the former stockholder would apply for such status by December 31, 1974. The Special Life Member, during his/her lifetime, would in all respects be treated as a Contributing Member of the Academy (which in those days would ordinarily require an annual contribution of $100) in return for special annual dues of $10.00.

At the present time, therefore, any shares existing as of September 10, 1974, were cancelled by virtue of the amendment of the Charter on that date, and thus have no intrinsic value. Certificates can be returned for insertion in the stock record book, to become a part of the historical record.